How Much Do Each of the NBA Superstars Actually Fill Arenas?

Each year, the NBA captivates millions of fans on television and in arenas throughout the country. For dedicated fan bases, attending a game is a testament to their undying commitment to the team. For casual fans, however, it can merely be a fun activity and a chance to see one of the stars play. Some NBA players are even said to “fill arenas” due to their stardom. Most even have their own shoe line.

At Versus Reviews we’re all about making well-informed comparisons, so we decided to dig into the data to differentiate these NBA stars. We wanted to compare the degree to which each of the big name players boosted game attendance. In our analysis we focused on the ones whose names are known by even occasional basketball fans: Michael Jordan, LeBron James, Kobe Bryant, and Shaquille O’Neal. These players are so well-known that they are a spectacle to see play, regardless of a fan’s team affiliation.

To determine each star’s ability to fill seats, we compared the average home game attendance for each team to the average attendance of games where they hosted one of the star players. In other words, we measured how many more people turned out for an NBA game when a star was in town. We summarized these results as an overall average and by season for each player. 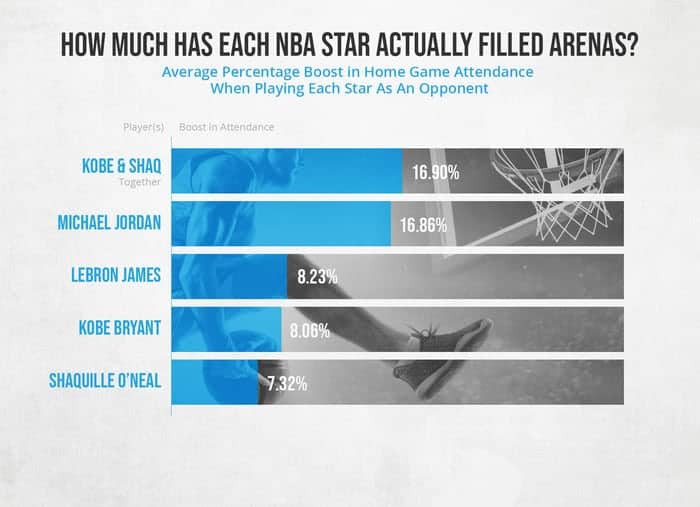 As it turns out, Michael Jordan had the greatest overall effect when it comes to increasing game attendance. He averaged a 16.86% boost across the seasons analyzed, compared to 8.23%, 8.06%, and 7.32% each for LeBron James, Kobe Bryant, and Shaquille O’Neal, respectively. That makes Jordan’s effect double that of LeBron. Interestingly, Kobe and Shaq caused arenas to be 18.90% fuller while playing together on the Lakers (up to 2004), which is only 0.04% greater than Jordan’s effect individually. This speaks to the star power of “His Airness.”

Next, we analyzed the average percentage boost in attendance caused by each player for each season. We only included seasons during which a player was a veritable star. That way, we were able to attribute the results to each one specifically. We also noted any season where a championship was won. 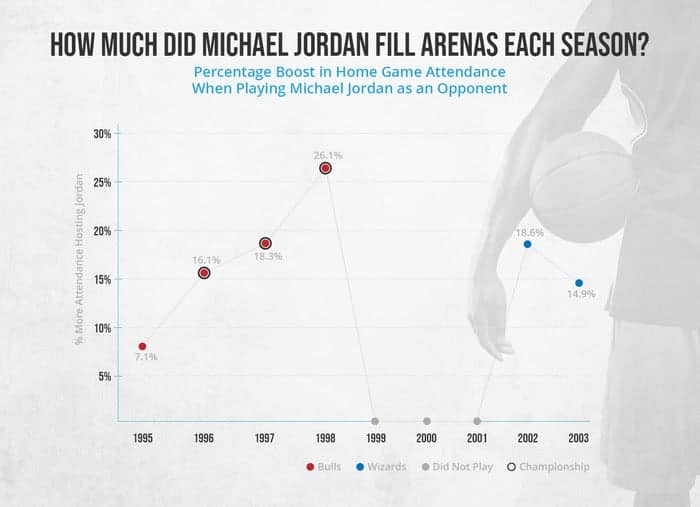 Michael Jordan clearly had a significant impact on attendance when looking at the data. Interestingly, it varied quite a bit depending on the season — it ranged from 7.1% in 1995 all the way up to 26.1% during his original farewell season with the Chicago Bulls (1998). This final season was also a championship year, which likely contributed to the large attendance boost. Jordan still attracted 14.9%-18.6% more fans to NBA games when he came back to play for the Wizards in 2002-2003. Even though he didn’t win any championships for Washington, this range is nearly double the average overall boosts LeBron, Kobe, and Shaq caused. 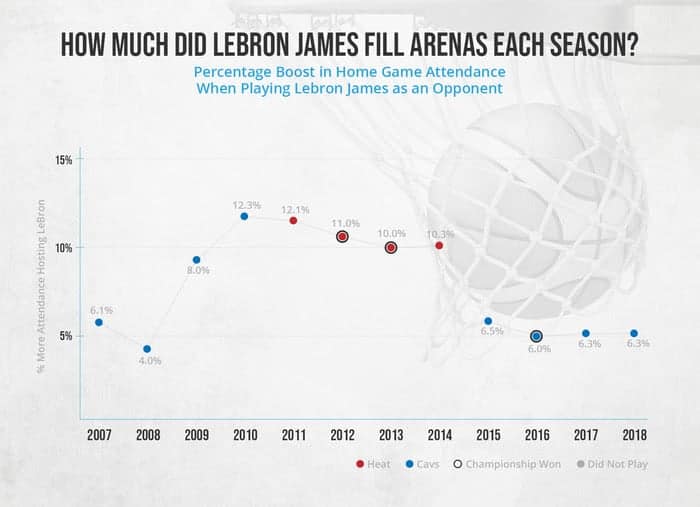 LeBron James’ stardom also has had a varied effect on attendance when looking at the data by season. Our data maps his career from 2007, when he undeniably had become a star, through the present. This allows us to see how his ability to fill seats was affected by the team changes. While he was part of the Cleveland Cavaliers up to 2010 he caused a 7.6% boost in attendance on average. This compares unfavorably to his time at the Heat (2011-2014), where he averaged 10.9% and won two championships with the help of Dwyane Wade and Chris Bosh. His effect dropped back down to 6.3% on average when he returned to the Cavaliers (2015-2018). This data suggests that a player’s team can contribute to their starpower and ability to fill arenas. During this time, the Heat often acted as the “villains” of the NBA, and fans filled arenas to cheer against them. 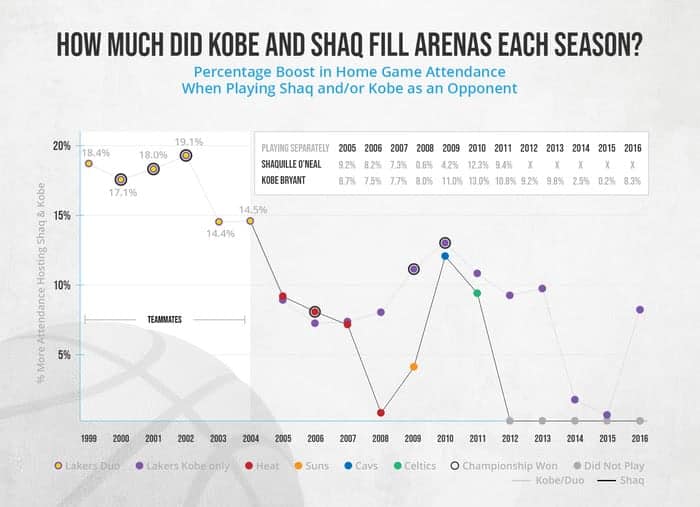 We decided to chart out Shaquille O’Neal and Kobe Bryant together because of their time playing as teammates on the Los Angeles Lakers until 2004. They were both household names during that period, which made it worth measuring their effect playing together and separately. Our data revealed undeniably that having two stars is better than one. As teammates they averaged a 16.9% boost in attendance — compared to 8.1% (Kobe) and 7.3% (Shaq) when playing on separate teams. When looking at the data by season, it’s apparent that Kobe’s effect didn’t vary by much except for 2014-2015 when it dropped below 3%. His averages were also slightly higher in years where the Lakers won the NBA Finals. Shaq’s effect, however, is much more volatile after 2004. During this period he jumped from the Heat to the Suns to the Cavaliers to the Celtics, which, along with his declining performance, likely prevented him from having a steady average like Kobe.

Professional basketball is sport of stars who carry teams and who are well-known to the general public. It makes an NBA game a fun event to attend even if someone isn’t a diehard fan. It will become more difficult to attribute boosts in attendance to one player’s stardom as teams collect a roster of stars, such as the the current Golden State Warriors, but looking at these four iconic players illustrates what someone of their talents can do for a team and its viewership. Kobe, Shaq, LeBron, and Jordan will always be compared for their abilities on the court. As our analysis shows, however, MJ is the “GOAT” at filling arenas.