The Most Popular Cocktail in Every State

Each U.S. state has its own unique personality, but seeing how some are unexpectedly similar can be just as interesting to uncover. This can be represented by regional accents, local landscapes, or (in a more lighthearted manner) by cocktail preferences.

With this in mind, we decided to look more closely at the most popular cocktails nationwide. We used Google search data to analyze each state’s interest in a wide range of cocktails, including both the trendy drinks and the staples. We were able to uncover the most popular one in every state and the results are quite intriguing. As it turns out, neighboring states are rarely in agreeance when it comes to their mixed drink of choice. 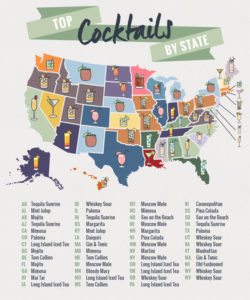 While some people may grab a drink before an event, many states appear to focus on brunch instead. 9 states out of 51 search for brunch drinks — mimosa, tequila sunrise, and bloody mary — more than any other option. Among these are California, North Carolina, and Minnesota. Of the three brunch drinks, mimosa and tequila sunrise are the more popular choices based on our data. 4 states each rank them the top choice compared to only 1 state for bloody mary.


Another interesting result was how varied each state’s pick tends to be from those next door. There are some cases where neighboring states share the same top cocktail, such as Oregon and Idaho with whiskey sour, but otherwise the regional results were diverse. In the west, for example, California was the only state to have mimosa as its #1 choice.

We also wanted to look at the most popular cocktails nationally based on these results. As it turns out, whiskey sour and Long Island iced tea tie for the most popular result based on count of states (6). Followed close behind are Moscow mule (5), tequila sunrise (4), and mimosa (4). The entire list is visualized in the graphic below. 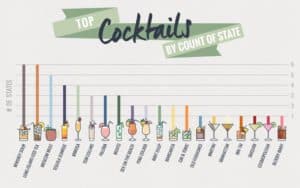 How does your state’s top cocktail compare to your own favorite drink? Tell us more in the comments below!