Remember commercials? Live television? Endlessly flipping channels? What about cliffhangers or dramatic twists that wouldn’t be resolved until next week’s episode, forcing you to cross your fingers a beloved character discovers the poison in her Chicken à la King? No? Me neither, and that’s due in part to streaming services’ domination of the television landscape.

Today’s viewers are younger and online more than audiences of the past, with smartphones and streaming apps making it easier than ever to watch what we want, when we want it. Television shows are no longer just for televisions. Hundreds of thousands of shows and movies of varying genres, popularity, and viewership are accessible via internet access and a low monthly subscription, prompting many to cut the cord and go cable-free.

So, why wait when you can binge instead? For some Americans, the answer may be in their monthly bills. With so many streaming services available, viewers may have trouble finding all the content they want through one streaming platform. And with multiple streaming subscriptions and rising monthly prices, cutting the cord may no longer be the more affordable option. Which led us to the question: is anyone actually saving money by streaming, and where?

We set out to determine which states are actually saving money through streaming services instead of traditional cable. We asked Americans in every state which of six major streaming services—Netflix, Hulu, Amazon Prime, HBO Max, Disney+, and Apple TV+—they subscribe to on a monthly basis.

Then compared monthly streaming bills in each state with the average monthly cable bill.  Where Americans are saving money through streaming platforms over cable, and where they’re spending more without a cable box. 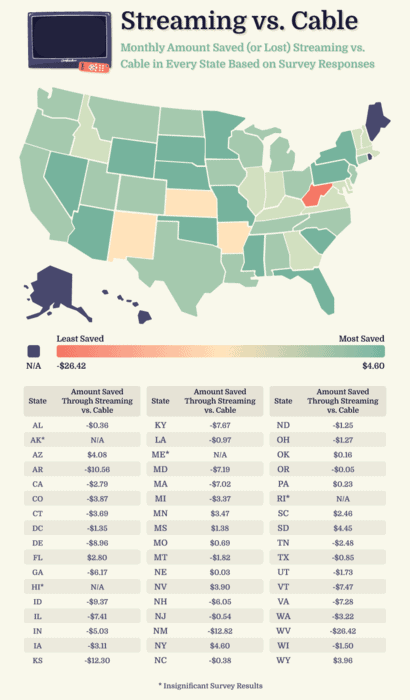 Basic subscription plans for each of the six major streaming services are significantly cheaper than the average monthly cable bill. Which comes in at about $72.60 a month. For Apple TV+ alone, customers can pay as little as $4.99 a month. While the new HBO Max rounds out the higher end of major streaming options at $14.99 a month.

Trading a cable package for an individual subscription would allow for big monthly savings. But across the country, respondents reported subscriptions to more than one streaming platform. Ultimately, we found that only 13 states are saving through streaming—and not by much. Dollar differences from the average cable bill range from average monthly savings of $4.60 in New York. To significant monthly spending in West Virginia, at $26.42. There are no distinct regional differences uncovered in this study.

Among the states with monthly savings, Missouri, Pennsylvania, Oklahoma, and Nebraska are saving less than $1.00 through streaming versus cable. Among those spending more on streaming than they would on cable, six states—Louisiana, Texas, New Jersey, North Carolina, Alabama, and Oregon—are spending less than $1.00 more than the average monthly cable bill. But for the majority of the country, the spending only increases from there. Still, none of the states have average monthly streaming bills greater than $100.00. West Virginia comes in just under the mark, with an average of $99.02 spent on streaming subscriptions each month.

The Biggest Spenders and Savers 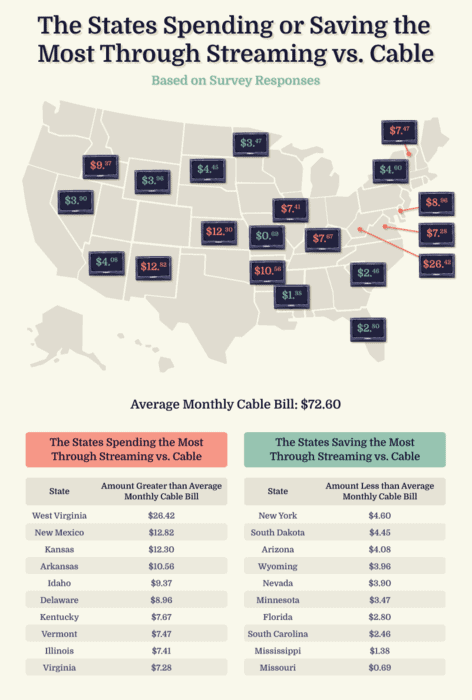 Despite statewide complaints of inadequate internet service, especially in rural areas, and climbing rates, West Virginians are spending the most on streaming services, with an average monthly streaming bill of $99.02—$13.60 more than New Mexico, the second biggest spender. The top four spenders are adding more than $10.00 to their monthly bills through streaming—an amount greater than an individual subscription to all but two of the six major streaming platforms. For the country’s biggest spenders, access to content outweighs a significantly lower cable bill.

Even in states where Americans are saving through streaming subscriptions instead of cable, the dollar differential is nothing to brag about. Nebraskans only save an average of $0.03 per month, while New Yorkers’ savings, at $4.60 per month, aren’t even enough for an Apple TV+ subscription.

While the benefits of streaming—accessibility, affordability, and ad-free viewing—remain for those with only one or two subscriptions and no cable bill, stacking streaming services for increased access to content has made it more difficult to argue in favor of streaming as an opportunity to save. Americans looking to save through streaming may need to decide which platforms offer them the content they most enjoy and cancel the rest.

For many of us, the ability to binge-watch our favorite shows, as well as buzzworthy new productions, was a key part of enduring the last year of social distancing and quarantine. Streaming platforms offered an escape from COVID-19 commercials and allowed us to connect from afar with friends and family through Zoom movie nights or conversations about a new release on Netflix. But for most of the country, streaming didn’t come with savings, and for some Americans, streaming bills were significantly higher than the average cable bill.

Thinking about cutting the cable cord in favor of streaming platforms, or paring down your subscription stack? Versus Reviews has you covered, with in-depth service and product reviews—including streaming service reviews—to help you make the best choice for your home, business, and family. Happy binge-watching!